Gadgets1687
A 200-year-old device primarily used by artists to sketch their subjects before falling into oblivion is making quite a comeback. NeoLucida is a 21st... 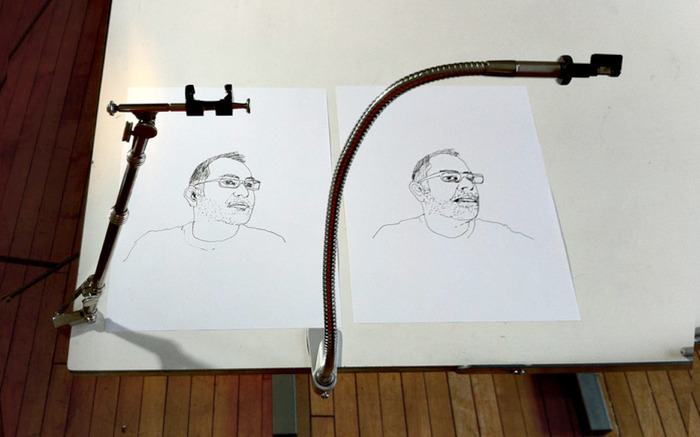 A 200-year-old device primarily used by artists to sketch their subjects before falling into oblivion is making quite a comeback. NeoLucida is a 21st century camera lucida that is very easy to use and highly affordable, making it one of the most successful crowdfunding campaigns in recent months.

The camera lucida was first patented in the early 19th century as a prismatic reflection device that works like a reverse overhead projector. The device allowed artists to sketch any objects accurately but stopped being used later on. Portraits created with an antique camera lucida (right) and the NeoLucida (left).

The device consists of a small eyepiece that contains a prism. The eyepiece is mounted on a goose neck which can be easily attached to the drawing board or to the table with the help of a clamp. The device is pointed at the subject and creates a superimposed reflected image of the subject onto a sheet of paper. The artist just has to look down into the eyepiece and start tracing the reflected image.

Some may argue that this is like cheating. And perhaps it was exactly this argument that drove the camera lucida out of use back in the 19th century. However, NeoLucida creators Pablo Garcia and Golan Levin, both artists and art professors, say the device emphasizes the relationship between technology and art, especially photo-realistic art. More specifically, Garcia and Levin say their device is aimed at stimulating interest in media archeology – the interconnected history of imaging technologies and visual culture. Their device is the first portable camera lucida manufactured in almost one hundred years and it is the most affordable ever designed. The NeoLucida is priced at $30, which is significantly cheaper than other similar devices available on the market. Modern camera lucidas are sold for about $200 and are not as portable as the NeoLucida.

The low price is due to the fact that it is manufactured from prefabricated parts. It is probably the reason why the device was so successful on Kickstarter: with still 20 days to go, the campaign has almost 10,500 backers and has raised $410,000, while its initial goal was $15,000. The initial run of 2,500 units has been sold out already, but Garcia and Levin are not planning to manufacture others for the time being. The device is expected to become commercially available starting next year.