Amazon Announces Kindle Voyage as the Next E-Reader Line

Amazon119 Gadgets1687
Amazon has announced the next step in the Kindle e-reader, named the Kindle Voyage. The successor to the Kindle Paperwhite, the Voyage comes with... 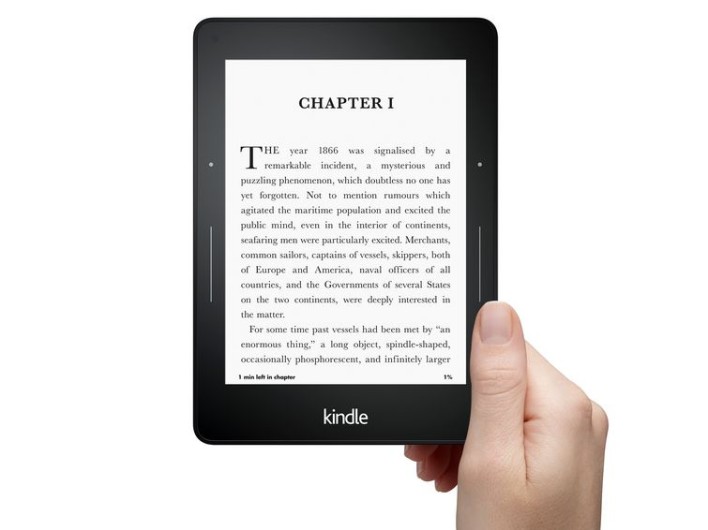 Amazon has announced the next step in the Kindle e-reader, named the Kindle Voyage. The successor to the Kindle Paperwhite, the Voyage comes with a few new features and a much clearer display, at 300PPI, it is the best e-reader display on the market.

In the past year, Amazon has taken a more relaxed route when it comes to the e-reader market. As Barnes & Noble step away from first party manufacturing, in favor of relying on Samsung, Amazon has clearly scooped up the lion share of the readers.

The Kindle Voyage keeps the same 6-inch screen size, it looks like the Amazon thinks this is the perfect size for an e-reader. We cannot complain, while tablets are still fighting over the 7 to 10-inch space, e-readers don’t need to take advantage of that extra space.

Other changes include no raised bezel, letting the screen sit at the same level as the bezel. This was a big complaint with some of the earlier Kindles. Amazon has also re-added touch buttons on the side of the Kindle Voyage, for those who don’t want to swipe pages.

In terms of size and weight, the Kindle Voyage is almost identical to the Kindle Paperwhite. It looks like Amazon is more focused on iterative updates to the e-reader experience, rather than creating a whole new type of Kindle.

On the software side, X-Ray has been updated to allow users to skim through certain parts in a book. This will allow users to go back into a previous chapter, refreshing their brain on the story, after a few weeks away from the book.

Amazon has also made it possible for users to link accounts to one another, using a share accounts feature. This will allow family and friends to share books with one another, we are not sure on the rules for this feature.